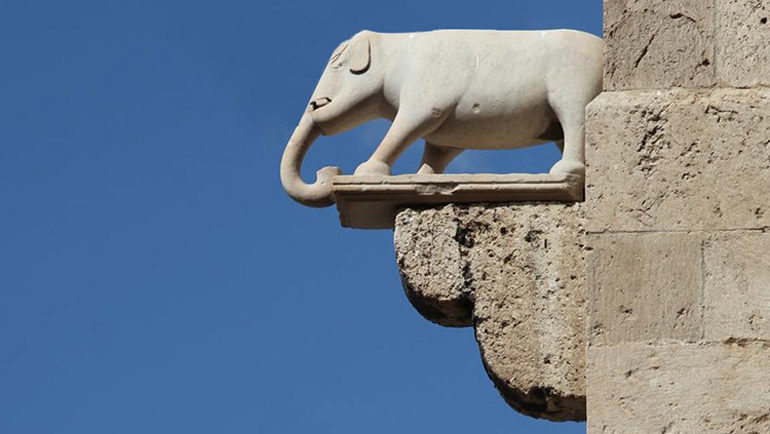 The castle is the medieval district of Cagliari that, with its mighty walls and its high Pisan towers, namely the Torre di San Pancrazio and the Torre dell’Elefante, fascinates tourists who are enchanted by antique shops and craftsmen, old crumbling houses and ancient noble palaces. A stone’s throw from the Torre dell’Elefante (the Tower of the Elephant) you will be enchanted by the beauty of the Basilica of Santa Croce and the Cathedral of Santa Maria Assunta.

In the Cathedral of Santa Maria Assunta, inside the Aragonese chapel, there is a precious relic: a thorn that is said to belong to the crown of Jesus, which arrived in Cagliari in 1527 along with other relics and works of art stolen from various churches in Rome and from the papal apartment itself. Shortly before reaching the port, the ship ran into a storm, and those who knew of the presence of the precious cargo – perhaps driven by the belief that the storm was an expression of divine anger at the sacrilegious thefts – confessed the fact to some religious persons on the ship, who once in Cagliari, informed the archbishop of the incident.

Pope Clement VII, once apprised of the facts, decided to donate some relics to the Cathedral of Cagliari, including the Holy Thorn and a Flemish triptych of the fifteenth century attributed to the painter Rogier Van der Weyden, both are on display during the festa dell’Assunzione (feast of the Assumption).
Near the cathedral the visit to the Palazzo Regio, also known as Viceregio, a historic building in Cagliari and the ancient residence of the representative of the king of Sardinia during the Aragonese, Spanish and Savoy domination is definitely a must.

Walking through the old shopping streets you will come across the bastion of Saint Remy, one of the most important fortifications of Cagliari. The imposing structure, built in classical style and held up by white and yellow limestone columns with Corinthian capitals, was inaugurated in 1901. In 1943, the double stairway and the triumphal arch were seriously damaged by bombing during World War II. During the war it became an infirmary and later a refuge for evacuees during the Second World War.